Health and Happiness for You and the Planet

In the 1990’s I read Steven Covey’s “7 Habits of Highly Effective People” and listened to the tape several times. I found most of the strategies very helpful and easy to remember. One of them was to begin with the end in mind. It is similar to having a goal but closer to setting an intention. Why would you want to start something if you don’t know what outcome you want? It made sense back then.

But today I had no idea what to expect from the Stretch Festival I had been offered a marquee at. The reason I decided to take the offer was to promote the workshop “Reversing Global Warming: Introduction to Drawdown.” I would also be able to promote TreeSisters and tropical forests in general. I thought the audience would be mainly adult and thought of ways to make it interactive. Two weeks before the event I found out it was more aimed at families with children. A volunteer for a local environmental group suggested colouring in, although they now used a personified dolphin (is that how you would describe a person in a dolphin suit?). I brainstormed and wrote ideas on butchers paper for a week before settling on a bunting or string of

‘Nature flags’, colouring-in a template of 2 children hugging a tree and a multi-media collage of a nature environment (ocean, estuary and land with trees and birds.) My mother, 88 years old, cut out and sewed the flags and came to help me set up. I thought she

might stay for an hour or so, but she loved talking to people, especially the young children, helping them colour-in. It didn’t matter if she got a bit mixed up explaining the collage, the dementia was not visible and she was shining. At the beginning of the event, before we had all the other posters up, several people admired them immensley. I loved seeing her smile (and could imagine her feel-good-feelings) when people commented and asked about the flags. 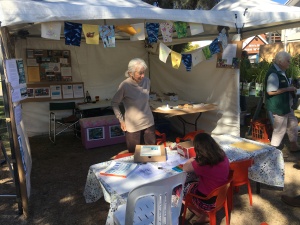 I never started with that ‘end in mind’ but it was brilliant.

I spoke to several children about loving nature, especially hugging trees, giving them love and getting answers back from them if you are worried. A highlight was when a mother asked her children if they wanted to hug a tree right then. We went to the tree I had the poster about oxygen on, and told them about the air we breathe in being turned in to the air we need by the tree. The mother added, “That is why we never cut down trees’. Then the 2 children and I hugged the tree. The children hugged it for quite a while: another ‘outcome’ that I did not ‘have in mind’.

Chatting with other environmental volunteers was interesting. We have a variety of passions and are called in different ways. Observing the ‘types of activist’ picture from “Story of Stuff” helped one person to gain another view on what they do.

The City council office is pro environment and active in public consultancy. They were asking people about what they love about Mandurah and how they would like to see two foreshores improved. I mentioned mangroves as they are magnificent at sequestering carbon, reduce wave action on the shore or river bank, create nurseries for fish and add another tourist attraction by creating a maze of roots (routes) to paddle through. But, apparently Mandurah doesn’t have mangroves, and has a policy of only planting natives. They suggest planting a type of tea tree (malaleuca) that can grow on the edge of the salty water. Les, from Peel Preservation Group commented that he had heard that many years ago, before a sea wall was built, there had been mangroves on a point. I can’t see why there wouldn’t have been mangroves as the area is well suited to them, and going back, even if thousands of years I am sure they were here. Well that got us talking about the change of species living in an area due to climate change. More species will come and take up residency as others become extinct or move to a climate more suited to their needs. Do we say they are not native so can’t stay? If a biological solution presents itself do we not even look into it scientifically just because it is not ‘native’? I hope not. We have been selecting species for our needs, industrialising them and neglecting the ones that we have no immediate need for, or worse still used them with total disregard to their suffering, existence and survival. Of course, we need to make sure they are compatible and don’t compete with other species, and that may take funds for research. Starting conversations is always rich in ways we may never know.

So, sometimes I prefer to be ‘just curious’ and have a go, rather than an expected outcome. You never know what you will find if you are open to whatever flows.